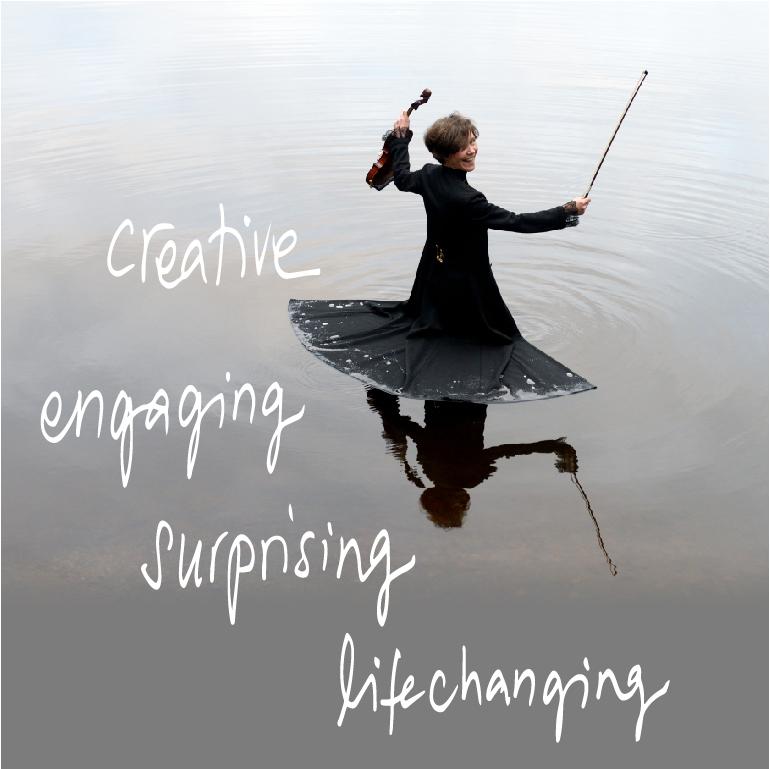 Johanna Almark is one of Finland’s most versatile musician. In combining playing several instruments and singing with conducting, composing and arranging she is striving to be a “Complete Musician”, an idea known from the baroque era. (Video in Finnish)

Johanna takes an active part in actions to prevent climate change.
On this music video she is both the arranger of Kerkko Koskinen’s music and the conductor of the ensemble consisting of a hundred voluntary singers and instrumentalists of different ages.

Johanna Almark – singer, orchestra and choral conductor, composer, arranger and violinist – is one of Finland’s most versatile musicians.

She graduated from the Sibelius-Academy in Helsinki with diplomas in both orchestral and choral conducting her teachers being Eri Klas, Jorma Panula, Leif Segerstam, Esa-Pekka Salonen, Atso Almila and Matti Hyökki.

Conductor: Almark held the position as conductor at the Helsinki City Theatre (1998 – 2004) and at the Swedish Theatre in Helsinki (2002 – 2004). She has conducted Finland ’s top choirs, among them Akademiska damkören Lyran (Artistic director 1988 – 1998), Choir of the Finnish National Opera, Choir of the Finnish Broadcasting Company, Tapiola Chamber Choir and Suomen Laulu. From the year 2019 Almark holds the position of artistic director of the Lasisoi festival in Nuottajärvi

Singer, producer, composer and arranger: As a singer Almark represents a unique combination of the virtuoso baroque soprano, the soulful jazz singer and the strong interpret of new music. She has released three solo records and produced a number of recordings. Almark composes and arranges music for both instrumental and vocal ensembles.

Four Strong Women are to appear on Almark’s repertoir during upcoming seasons focusing on combining singing with conducting. Luonnotar by Jean Sibelius, Mysteries of the Macabre by Györgi Ligeti, Glitter and be gay from the operetta Candide by Leonard Bernstein and Jukka Linkolas Concerto for Jazz Soprano and Orchestra, commissioned by Almark herself.

Almark was awarded the Prize of Finnish Swedish Heritage Day 2017 with the following motivation:
“Johanna Almark has a musical expression of her own where she broad mindedly combines several musical genres, spanning from baroque to world music and jazz. Besides her career as a professional performing artist Almark promotes amateur music. She has conducted choirs and orchestras at musical camps for children and youth. As an arranger, composer, singer, violinist and improviser Almark organizes interactive concerts where the audience takes part in the music making. With her exceptional musical talent and positive energy Almark is a great asset for the Finnish cultural life”.

Almark gives workshops on physical and vocal expression and improvisation. The workshops – aimed both at professionals and amateurs, children and adults – focuses on rhythm, physical movement and learning music by ear, drawing inspiration from both Western art music as well as from different ethnic traditions.

Johanna’s heart beats for our environment. She takes an active part in the preservation of our nature and it’s biodiversity as well as in actions to prevent climate change. During 2019 she is the artistic director for concerts and video productions included in the Climate Aid project.